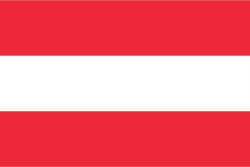 1.1.1.WATER RESOURCES The annual precipitation average is 1,170mm, which corresponds to a precipitation volume of some 100 billion m3 per annum. About 55 billion m3 of this rain water runs off into water bodies, whereas 45 billion m3 simply evaporates into the atmosphere. The above figures determine the hydrological balance for the period 1961 to 1990. The Danube is a major economic, geographical and cultural force in Austria. Draining over 96 per cent of the country’s territory, the basin is home to 7.7 million people. In a country dominated by the Alps, the flat lands provided by the rivers are of huge significance for agriculture, human settlements and infrastructure. The Austrian territory accounts for 10 per cent of the total area of the Danube Basin. The Danube has its source near Donaueschingen in southwestern Germany and flows through Austria before emptying into the Black Sea. It is the only major European river that flows eastwards, and its importance as an inland waterway was enhanced by the completion in 1992 of the Rhine-Main-Danube Canal in Bavaria, which connects the Rhine and Main rivers with the Danube and makes barge traffic from the North Sea to the Black Sea possible. The major rivers north of the watershed of the Austrian Alps (the Inn in Tyrol, the Salzach in Salzburg, and the Enns in Styria and Upper Austria) are direct tributaries of the Danube and flow north into the Danube valley, whereas the rivers south of the watershed in central and eastern Austria (the Gail and Drau rivers in Carinthia and the Mürz and Mur rivers in Styria) flow south into the drainage system of the Drau, which eventually empties into the Danube in Serbia. Consequently, central and eastern Austria are geographically oriented away from the watershed of the Alps: the provinces of Upper Austria and Lower Austria toward the Danube and the provinces of Carinthia and Styria toward the Drau. Essential water reserves are found in the karst terranes of Northern and Southern Kalkalpen. About one quarter of the total precipitation falls in this area, which covers 20 per cent of the national territory of Austria. About 15 per cent of the federal territory is covered by the alternately permeable tertiary rock formations of the pre-Alpine region. The remaining 20 per cent of the national territory is covered with Pleistocene and Holocene sediments, found in the pre-Alpine region and in the valleys and basins of the Alps with, in some areas, enormous pore water resources.

1.1.2.WATER USE About 84 billion m3 of water are available to Austria per year. Austria’s total annual water demand amounts to 2.6 billion m³, which is equal to approximately 3 per cent of the renewable quantity of water. More than two thirds thereof is accounted for by for industry, 35 per cent is required for drinking water, and 5 per cent is needed in agriculture. However, apart from these direct abstractions, water is also utilized in many other ways, for example as a source of energy: 65 per cent of the demand for electricity is covered by hydroelectric power plants. Water has also become an indispensable factor in tourism. On average, every Austrian consumes about 150L of water daily (not including trade, industry, or large-scale consumers). If we take into account companies as well, this quantity rises to 260L/day. These figures have remained about the same for many years. The use of water-saving production processes and technologies, the increased recycling of used industrial water, and the consistent elimination of water losses in the water piping system and in households have led to the decoupling of economic growth and water consumption. Industry is Austria’s largest consumer of water. It accounts for almost two thirds of the entire demand for water (including cooling water). The most recent survey of water consumption by the industry was conducted in 1994 within the framework of the Austrian Industriestatistik (Industrial Statistics). The sector with the highest share in the total consumption of water is the iron and steel industry (41.5 per cent of the total consumption), followed by the chemical industry (28.5 per cent), the paper industry (15.6 per cent) and the food industry (3.6 per cent). In agriculture, about 50 per cent of the required water is needed for watering and 50 per cent for animal husbandry.

1.2.WATER QUALITY, ECOSYSTEMS AND HUMAN HEALTH Austria’s major environmental problems include the forest degradation caused by air and soil pollution; the soil pollution results from the use of agricultural chemicals, and the air pollution from emissions by coal- and oil-fired power stations and industrial plants and from trucks transiting Austria between northern and southern Europe. The water quality of Austria’s water bodies is for the most part very good. Measures taken to remove the organic and chemical pollutants from industrial and municipal sources have generally been successful. Investments in wastewater purification have thus been worthwhile. Hazardous substances have been detected only very rarely. As regards organic pollution and nutrient pollution, about 80 per cent of the water network studied complies with the criteria for ‘good’ status. Less favourable is the situation of the river structure (hydromorphological situation). For approximately 56 per cent of the assessed network of running waters, assessment indicates that Country Overview - Austria ‘good’ status has not been achieved. Similar figures have been determined in many other European countries. In most cases, these problems have a historical cause, namely the utilization of water power and protection against flooding, as well as the establishment of agricultural production areas. Studies were conducted of intensively built-up waters to determine whether the restoration of the good ecological status could have negative impacts on existing utilizations. These waters include 44 per cent of the running-water stretches that were examined. They were provisionally identified as ‘artificial or heavily modified’ waters. To such stretches of water, lower quality requirements will apply.

Restoring the Floodplains and Improving the Habitat Along the Danube (Project)